In Explorer Grid or List views, you are able to select one or more Elements (see 1 below), and then copy those from one Workspace to another (see 2 below).

💡 You can use this feature to copy interesting content from the ITONICS Showroom into your own Workspace to edit and evaluate them. Have a look here for more information.

What happens with ratings when copying?

After copying Elements that already have ratings to another Workspace, only the average rating value will be copied over. These copied ratings will also be marked as such. As soon as you or a colleague add your own rating in the target Workspace, the average from the source Workspace will be overwritten.

The copying action comes with the option to force an update of already copied Elements, though, to allow you to get the most up-to-date version of an Element in the target Workspace. 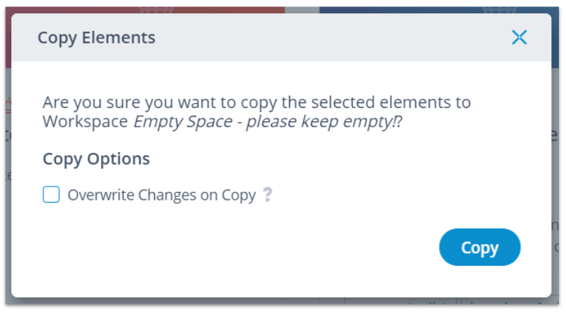 The following information will not be overwritten: