The Innovation OS for Everyone

ITONICS is the #1 digital innovation platform for SMEs and big enterprises. Start lean and think big.

Create your own pre-filled Trend, Technology or Risk Radars

GET STARTED WITH YOUR RADAR

Use the AI-enabled Signals Feed for automated market screening

Automate the search for upcoming trends and "hot" topics in your market with AI-based environmental scanning engine ITONICS Insights that screens news, patent and publication databases for you. 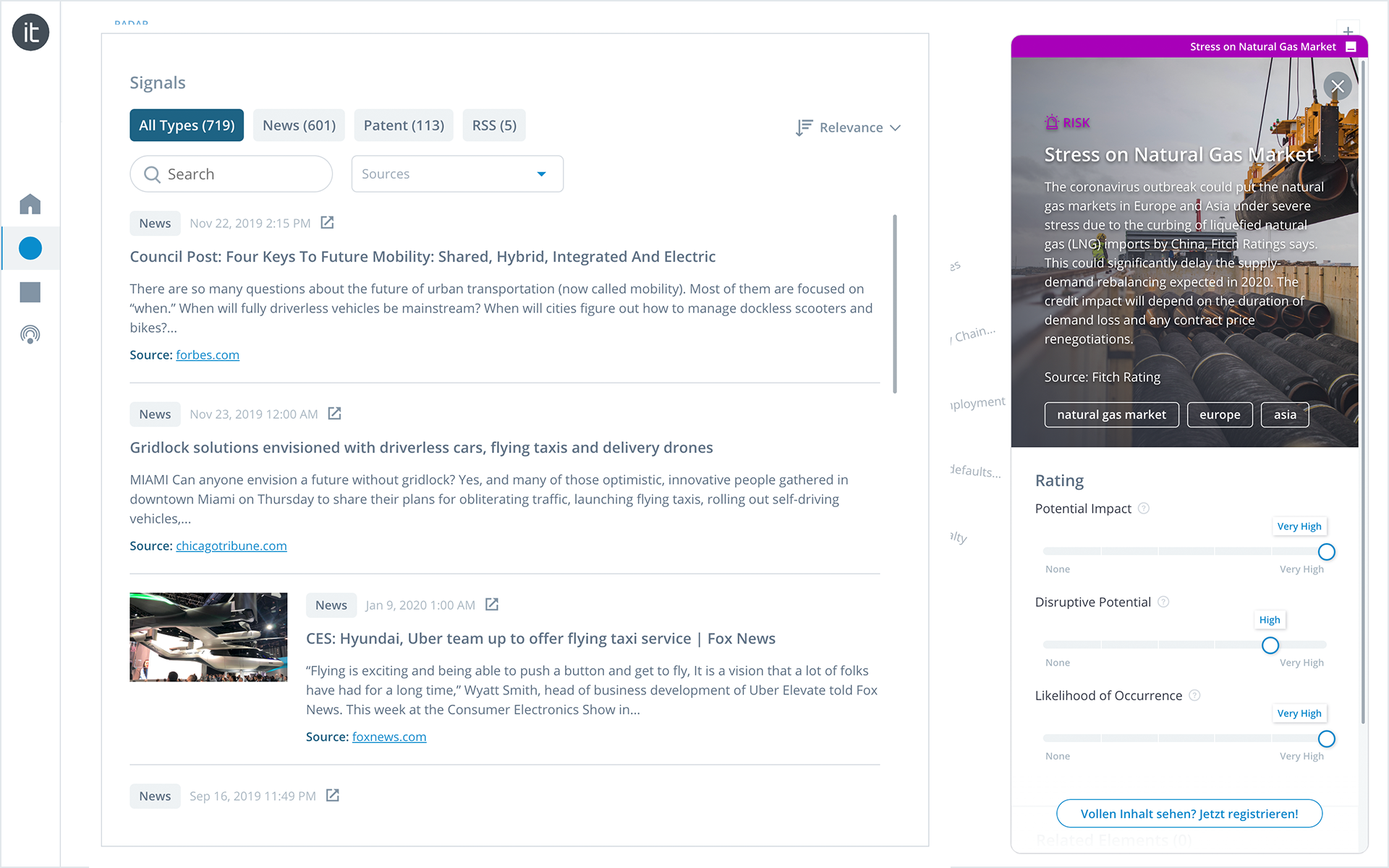 Monitor your innovation and technology pipeline within lean Innovation Portfolios

Monitor your innovation and technology pipeline within lean portfolios and identify "white spots" based on solid data and a systematic evaluation process. 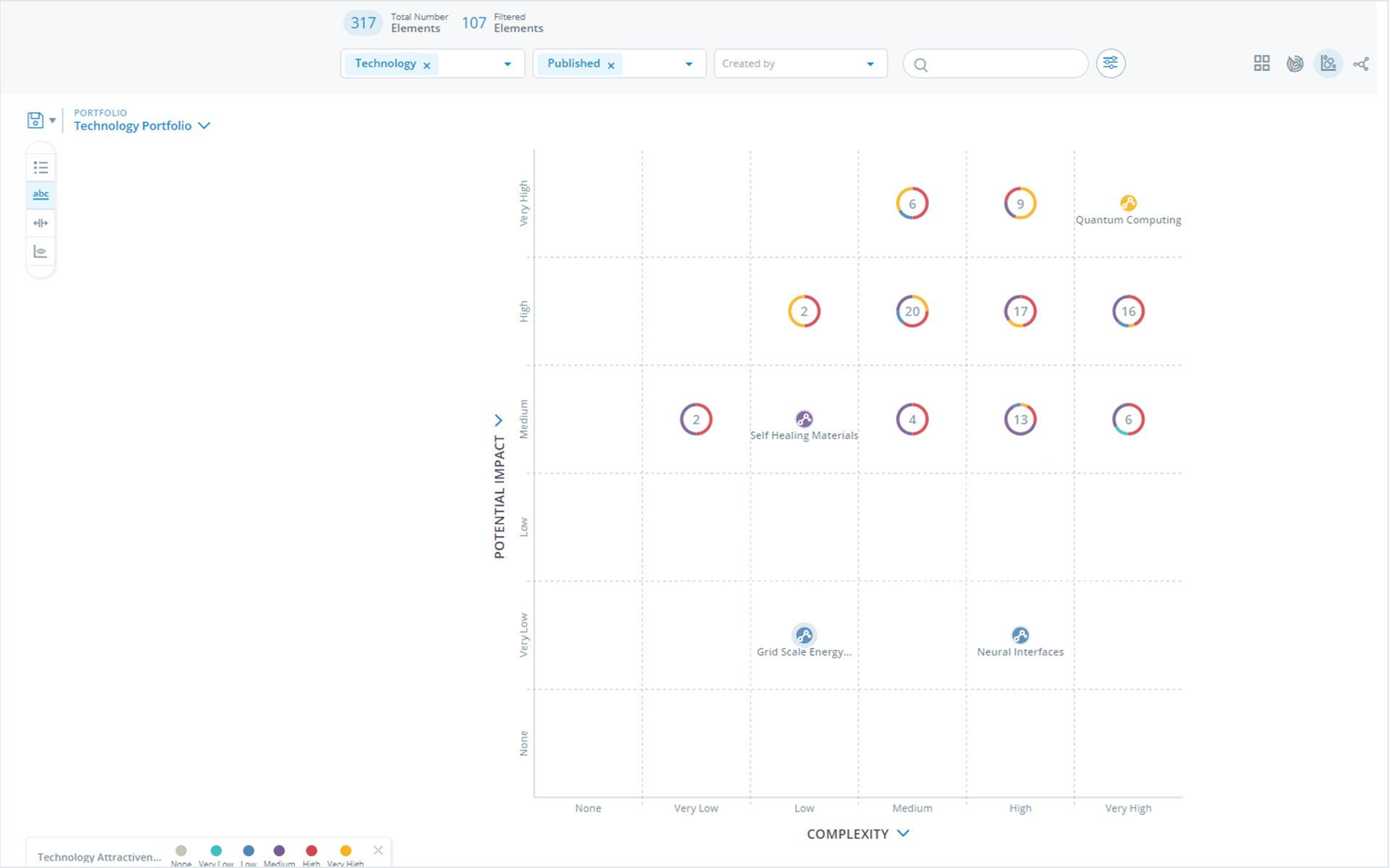 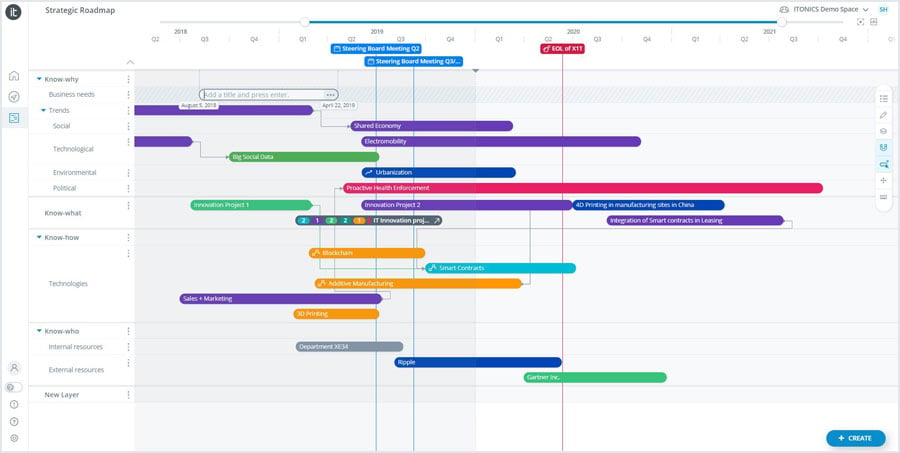 Your digital toolbox for game-changing innovation

As the leader in digital innovation management, we enable clients to maximize their overall innovation efforts in a lean, fast, and cost-efficient way.

You want to reduce your time to market by 20-30%, increase innovation and new product success by 40-60% and reduce your low value projects? Benefit from highly efficient processes and become an organization that can adapt to changes in a quick and agile manner.

ITONICS' digital innovation platform is aimed at SMEs and large enterprises of all maturity levels. Are you just taking the first steps in trend and technology management? Or do you already have all the necessary processes and a dedicated team at hand and want to take your innovation ecosystem to a digital level?

Our Innovation Cloud is now available for everyone! 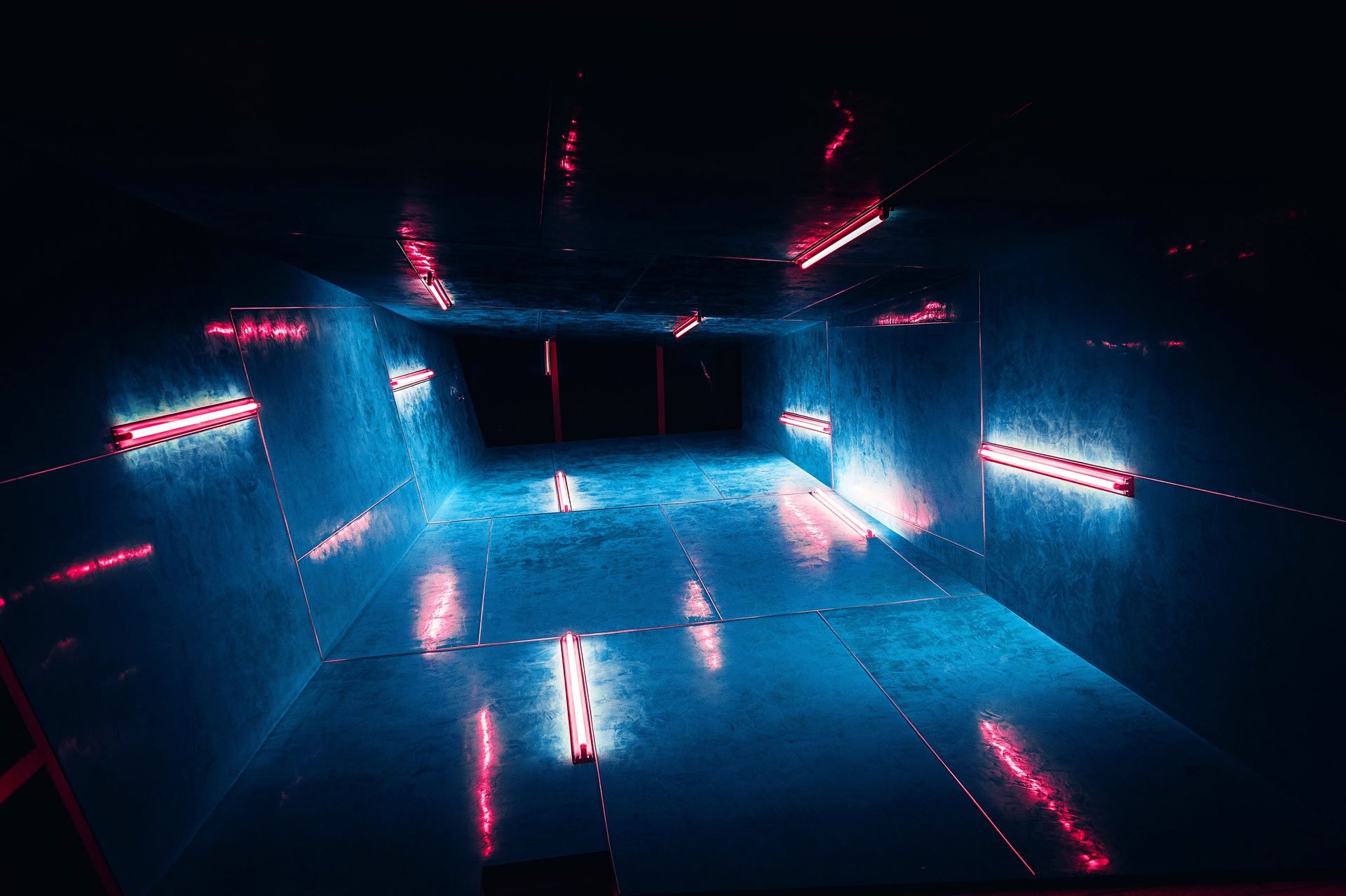 Learn more about Our Pricing and Onboarding Packages

Choose your innovation software package and become an innovation rockstar 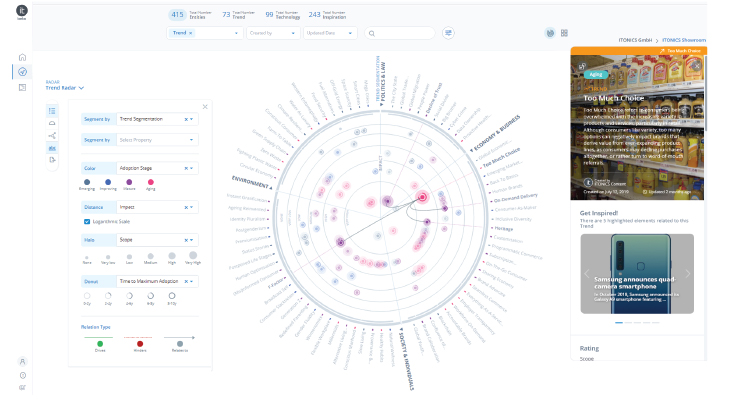 Visualize all relevant factors affecting your business and identify new growth opportunities with our pre-filled Trend, Technology and Risk Radars. 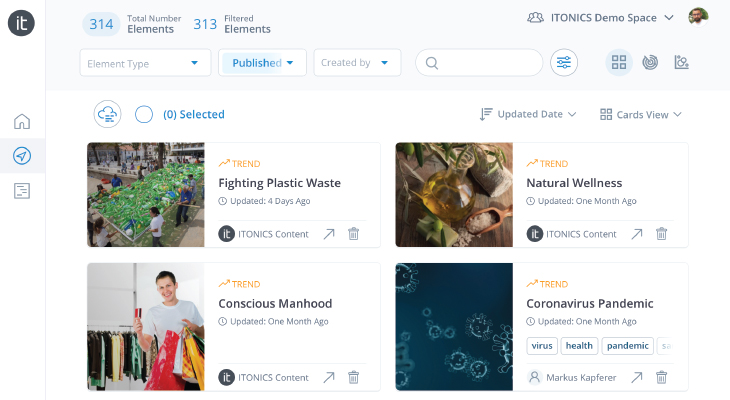 Our trend and technology content portfolios are accurately updated, merged, and re-evaluated every year while new inspirations are poured in at least every three months and signals are updated in real-time. 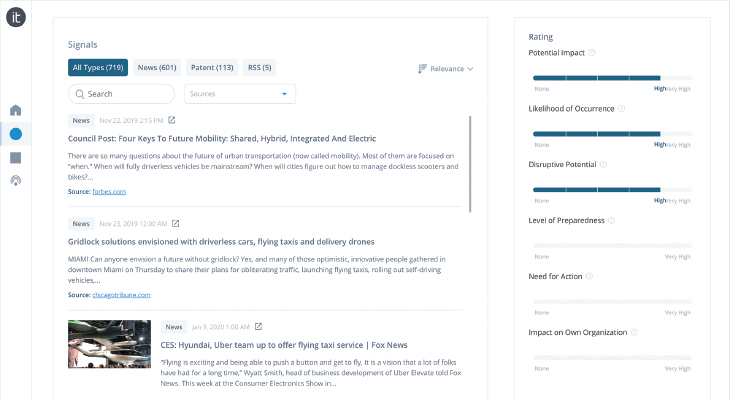 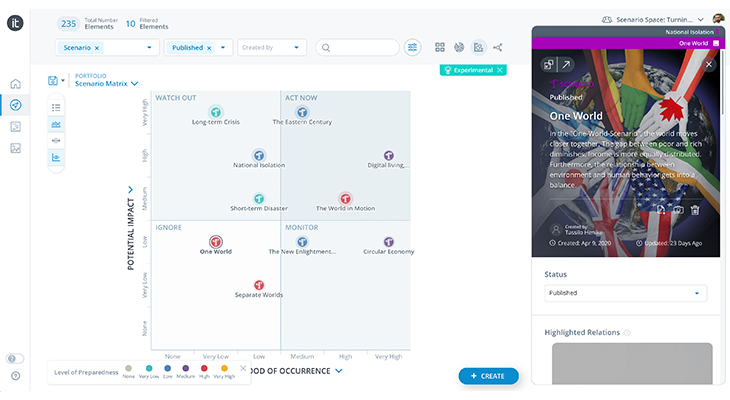 Explore how the future could be shaped and adapt your strategy accordingly with our scenario planning tools.

Analyze and monitor your innovation portfolio with regard to your strategic goals and identify “white spots”. 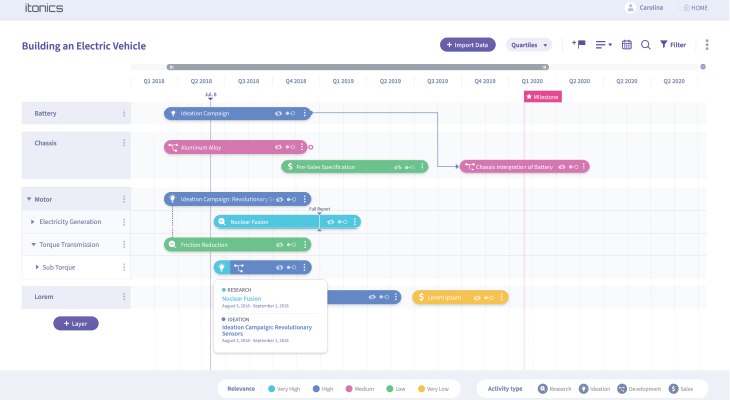 The holistic roadmapping tool for bridging trends, technologies, business opportunities, and companies, helping to plan and steer the future of your business.

How long can I try ITONICS for free?

We offer a 30-day free trial of the ITONICS Cloud solution. This includes the entire core functionality of Radar and Roadmap.

What is the billing interval for the ITONICS Starter & Growth packages?

We have a monthly rolling billing interval, i.e. if you finish your trial on 18 February for example, you will be billed a month later, so 17 March.

What are the conditions for cancelling my subscription for ITONICS Starter & Growth packages?

You can deactivate your ITONICS Organization at any time which will cancel your subscription at the end of the current billing period.

How can I pay for the ITONICS Starter & Growth packages?

You can pay for ITONICS Starter & Growth packages by credit card. Simply add a card and your billing information in the Organization’s settings, and we will take care of the rest.

How do you determine the user count for billing purposes?

At the end of the billing period, we look at the maximum number of active users for that Organization at any time during that period. Consider for example a billing period from 18 February to 17 March with a starting user count of 3 and the ITONICS Radar module being active. You then invite 5 users on 19 February, resulting in 8 active users, and deactivate 5 users on 21 February, setting the count of active user back to 3. At the end of the billing period you will be charged for the Growth package with one module and 8 users, resulting in a total of €232.

Can I choose between the Starter and Growth packages?

You cannot manually choose the package. At the end of the billing period, it will be automatically determined for that billing period based on the billable user count.

What happens when I subscribe to a module in the middle of the billing period?

Global innovators are growing their business with ITONICS

Fresh Input from our Innovation Experts